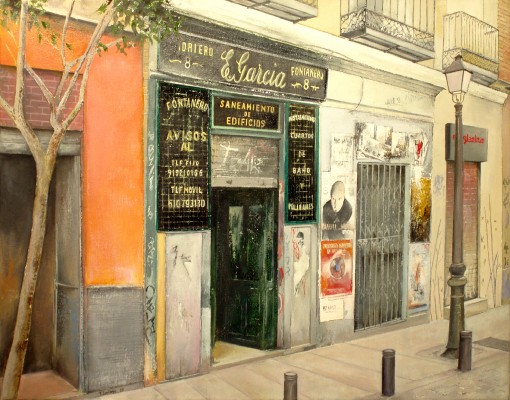 Tomas Castaño was born in Santander (Spain) in 1953. From a young age shows a special inclination towards drawing, but until the age of 17 years he does not take the first brushes and start painting. Self-taught, Tomas carved himself, based on determination and enthusiasm. He has a realistic style, his paintings are very well drawn and he also worries for the composition and perspective of his works. He is a landscape artist but characterized by his architectural work. His work is characterized by a serene and poetic realism, which translates the artist's delight when he paints streets of old quarters, antique buildings and facades with tradition. His paintings catch the magic of the aesthetics of the antiques, and transmit all the warmth and humanization of unprocessed environments by modern life. He has shown his work in group exhibitions in several countries such as Germany, Netherlands, USA, France, Argentina, Japan, Italy, Korea and numerous solo and group exhibitions in Spain. Tomas Castaño works represented Cantabria in the Florence Biennale in the 2005 edition. His work is recognized by the distinctive style and ambience that he creates in finishing his series of old taverns. His work is in the following public collections. Hotel Central, Santander, Spain Hotel Palacio de Mar, Santander, Spain. Castro Urdiales City Townhall, Castrourdiales, Spain Villanueva de Villaescusa City Townhall, Villanueva de Villaescusa, Spain. CC.OO Headquarters, Santander, Spain. His works are in private collections of Spain, France, Puerto Rico, USA, Costa Rica and Korea. In 2012 he was invited by The General Electric Company, USA to take part of the exhibition GE's 2012 Hispanic Heritage Month Art Exhibition. He was invited by the Bellarte Gallery Seoul-Korea to participate in the Ibero-American Art Fair Seoul 2012, showing his work along with works of the prestigious artists such as Fernando Botero, Oswaldo Guayasamin, Rufino Tamayo and Roberto Fabelo