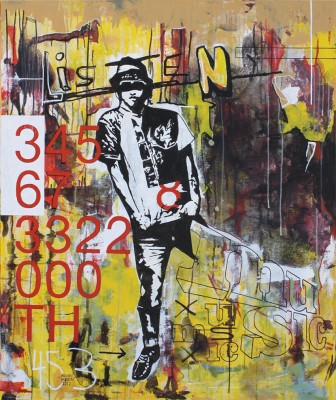 ALVARO VAQUERO / The artist •In the morning of October 2nd 1980, Alvaro Vaquero was born in the city of Buenos Aires. •His artwork begins as a teenager. Vaquero´s experimentation and sketchs lead to his later vast works production. •In 1999 the artist begins his studies in Architecture and Graphic Design at Universidad de Buenos Aires (Buenos Aires University) with the purpose of developing his self-taught knowledge even more. •After studying for many years, he finds the need to learn about technology and animation. In this way, Vaquero attends several technology courses specialized in digital art and photography. •In the meantime, he also develops interest in clothing and advertising, so he practices his well developed skills at Kepel and Mata advertising agencies after which he undertakes a new fashion business. •In 2008 Vaquero travels to New York to learn even more about this cosmopolitan city´s distinctive art. •In 2009 Alvaro Vaquero studies and develops screen-printing techniques in Andrea Moccio´s studio. •His paintings have been displayed in several exhibits: 2008: BANCO PROVINCIA: Premio Estímulo Pintura. 2009: ARTESI Supermercado de Arte: Multiespacio Darwin, Hipódromo de San Isidro. 2009: MOSAIK Galería, Buenos Aires, Argentina. 2010: ARTEESPACIO Almacén de Arte: Multiespacio Darwin, Hipódromo de San Isidro. 2010: FORCADELL Part Time Bureau, Buenos Aires, Argentina. •At the moment, collectors and individuals are acquiring many of Vaquero´s paintings both nationally and internationally. ALVARO VAQUERO / His reflection Fond of new tendencies, fashion, music and film, Alvaro Vaquero´s works are a reflection of an ever changing world. The artist mirrors in his outstanding paintings his perception of the endless codes that we all use on an everyday basis but rarely acknowledge. The works of vaquero are rooted in an hidden spot of reality were he captures and reflects the frantic pace of time with its constant symbols mixture and superimposition, contradictions and information overflow. The artist´s works point out the rhythm found in colours, and the combination of pop and urban art through various pictorial techniques leads to the author´s unique signature. The integration of images and alphanumeric characters create a superimposition of layers which is the main feature of Vaquero´s works. Collage techniques, symbols and signs closely put together, and a varied palette makes possible multiple readings of a constant in and out zooming game. As a result, the canvas becomes three-dimensional creating a singular script code and a high visual impact. The lack of explicit series is a main feature of Vaquero´s artistic works. His paintings involve surrealism principles, as well as conceptual art, while on the verge of avant-garde styles. The titles for his works reflect an original trait about an artist who knows how to blend the art and world accurately. Urban and contemporary scenes are what we find running through Alvaro Vaquero´s works. His art is full of traits from the world ´s music, films, fashion, culture and advertisement. The artist´s avant-garde creations suggest a blending of daily life elements were no detail is left aside. The complexity and detail of every painting leads to a harmonious artistic work that captures every scene of reality. Camila Ocampo, Art Critic